This continues our photo-report examining Los Angeles's new "Orange Line" busway, widely regarded as perhaps the premier recent example of state-of-the-art "Bus Rapid Transit" ("BRT") – and the wide range of claims that this type of bus deployment is "rapid transit on rubber tires" and "just like rail transit, but cheaper". in this section, we turn to the buses, their performance, and their interior space and amenities – including a comparison with light rail transit (LRT).

According to a report in Modern Transportation World (9 February 2005), passengers on the "Orange Line" busway can ride 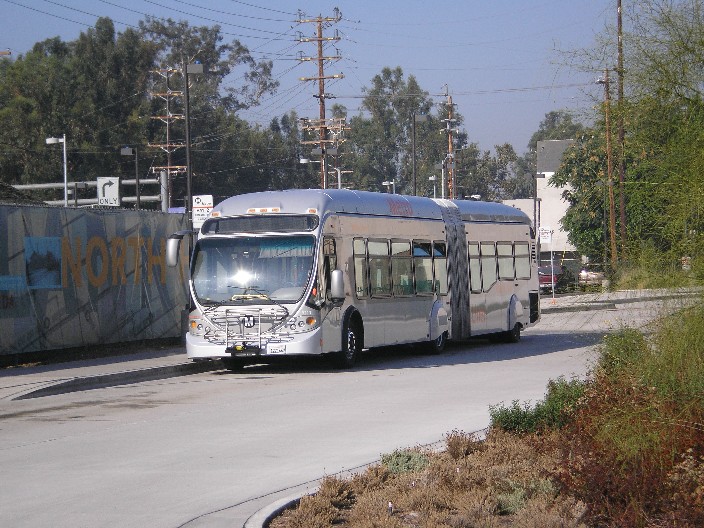 The 60 foot-long articulated NABI "Bus Rapid Transit" buses have 57 seats, and, according to the article, cost $633,000 each. Certainly, they are state-of-the-art in performance and comfort. However, as our photo-report suggests, it is clear that they fall short in comparison with rail transit rolling stock. For example, in Part 2 of our report, focusing on infrastructure issues, we noted the roughness of the paveway (already rutted after less than a year of service), which produces a bumpy ride quality in addition to the usual jerkiness associated with bus operation. Furthermore, the relatively lower acceleration of these large, articulated, fuel-powered buses, in comparison with electric rail, apparently accounts for some of the lower schedule speed on the "Orange Line" as well as poorer ride quality. Other aspects of these "BRT" buses are discussed below. 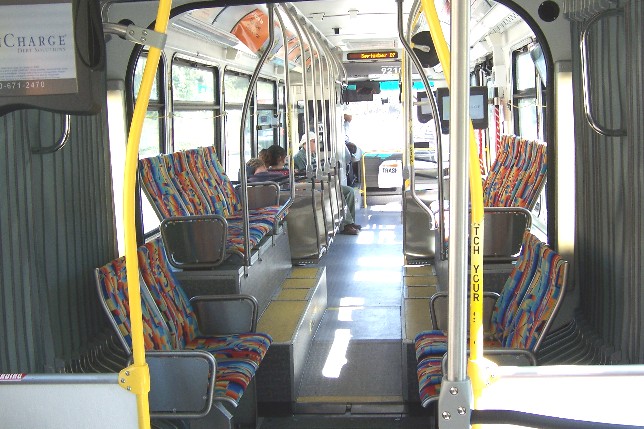 To try to pack seats into the NABI bus, engineers have apparently opted to expect passengers to do a lot of climbing, to clear the wheelwells. It can be seen that some midsection seats are raised way up. This photo was taken from the elevated rear gallery of the bus.
[Photo: L. Henry] 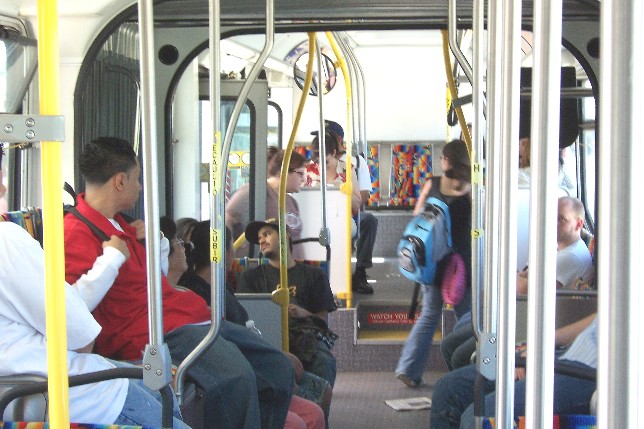 In this photo, a young female passenger, with backpack, can be seen making the steep climb into one of the high seats in the elevated rear gallery (evidently raised to clear the rear wheels, axle, and differential).
[Photo: L. Henry] 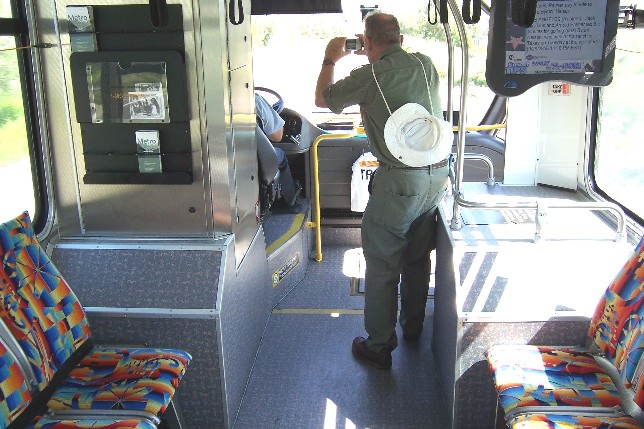 The space consumed by the front wheelwells is evident in this photo, with Light Rail Now website publisher Dave Dobbs trying to snap a photo in the narrow space between the two. And this is the confined passage that wheelchair passengers and others requiring level boarding (available only via the flipover ramp at the front door) are expected to navigate to enter the bus!
[Photo: L. Henry] 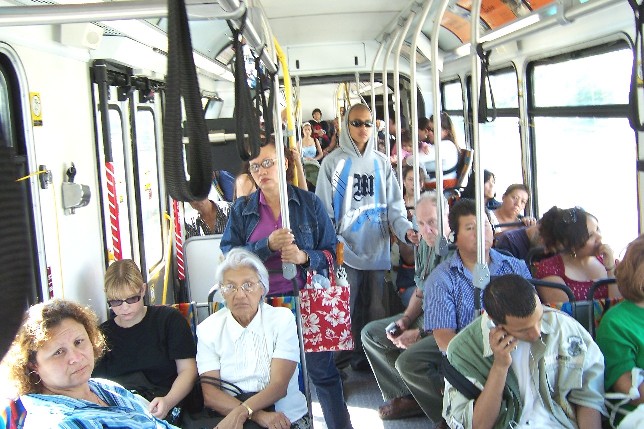 This is the interior space situation about 2/3 through the journey from Warner Center to North Hollywood – and this is an offpeak, midday trip! About 23 individual passengers can be counted in this photo (there are more on each side of the photographer, plus a few obscured in the back).
[Photo: L. Henry] 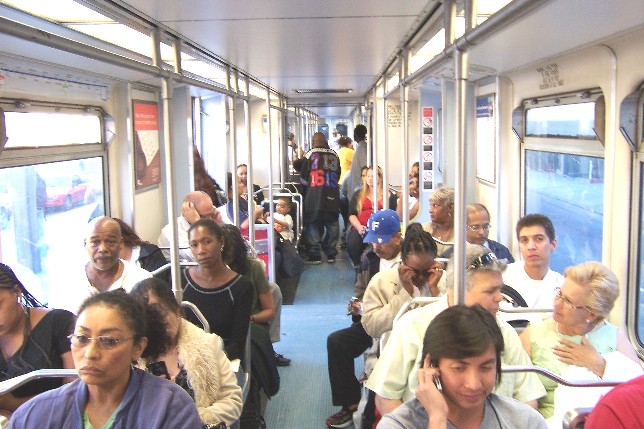 The "Orange Line" bus interior can be compared with a similar interior view of a railcar on one of LA's LRT lines. This photo shows the interior space situation of a southbound Blue Line train in the afternoon peak period. About 29 individual passengers can be counted in this photo (there are more on each side of and behind the photographer, plus a few obscured in the distance, at the far end of the car). Even with about 25% more passengers in view, the conditions seem far less crowded – and this is just one car of a 3-car train!
[Photo: L. Henry] 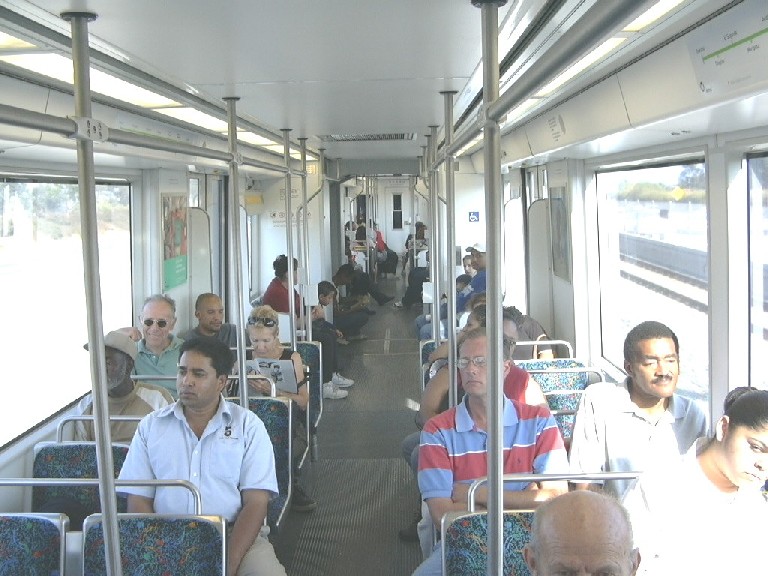 In a September 2004 photo, this is the interior space situation of a westbound Green Line train at midday – basically, comparable to the time period (and passenger total) of the "Orange Line" bus interior photo shown above. Conditions appear even less crowded than on the "BRT" bus – seats available, no standees – and this is just one car of a 2-car train!
[Photo: L. Henry]