Urban: Urban tramways or light railways, with service frequency between 3 to 10 minutes (peak or off-peak hours).
Suburban/interurban: Heavy-duty suburban railway, in a few cases with some segments of street running, but often on separate right-of-way with gate barriers at crossings. Headway typically varies from 10 to 30 minutes depending on line and period of day; in some cases, service resembles that of RPR, with headways between 30 to 60 minutes.
Tourist/interurban: Railway used mainly by tourists, but with a significant proportion of traffic generated by local inhabitants.
Tourist-Recreational: Predominantly scenic or recreational lines used only by tourists, except perhaps for a very small portion of ridership contributed by locals inhabitants of small villages (not more than 100 to 1000 inhabitants each).

in addition, Switzerland has a number of purely seasonal, tourist-oriented recreational railways, such as the Blonay-Chamby line, a museum-like line open ony in summer running steam trains.

More on Rail Transit and Public Transport in Switzerland

Copenhagen, already renowned for its RPR system, in 2002 opened its urban automated light metro. Recently, city planners announced that an LRT system would also be installed. 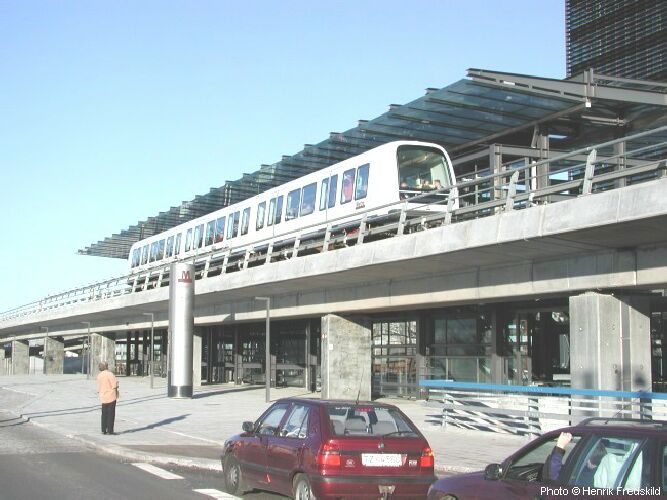 Sweden has steadily upgraded and expanded its network of RPR services and other rail transit, particularly Stockholm's rail rapid transit metro, opened in 1950. Legacy tramway systems have also been seeing development, including the ones in Gothenburg, Norrköping, and Stockholm.

Norway also has upgraded its network of RPR services, as well as Oslo's rail rapid transit metro (dating from 1966). Legacy tramways in Oslo and Trondheim have also been upgraded, and planning is well under way for an LRT tramway for Bergen.

in addition to the usual RPR services, Helsinki not only operates a rapid rail metro, dating from 1982, but also a well-modernized legacy LRT tramway.

Messina and Sassari have opened new LRT systems, and other new systems are in development in Verona, Florence, Palermo, Cagliari, and Bergamo.

Spain also has a national urban and regional network of RPR, legacy rail rapid transit metros in Madrid and Barcelona, and another in Bilbao, opened in 1995. But there has also been aggressive development of LRT. Alicante is upgrading a legacy tramway to modern LRT standards. Besides a number of other legacy and heritage lines, new systems have been installed in Valencia (1988) and Bilbao (2002), and Madrid is also planning a new LRT tramway system.

More on Rail Transit and Public Transport in Spain

Like other European nations, Portugal has a good network of RPR systems, and Lisbon operates a metro dating from 1959. in addition, Lisbon has maintained a heritage LRT tramway system.

Porto is upgrading its own heritage tramway system into a modern LRT system, and in the South Tagus area the Portuguese government is funding the construction of a light rail system to serve the communities located on the south bank of the Tagus river (opposite the capital city of Lisbon).

More on Light Rail and Public Transport in Greece

Belgrade is served by RPR as well as a legacy LRT tramway. in addition, the city plans a new three-line LRT network.

Restoration of Sarajevo's small legacy tramway after the civil war was a major milestone for the country. The system has been subsequently upgraded.

in addition to the rapid rail metro in Bucharest, a sizable number of Romanian cities and towns operate LRT tramways, both legacy systems dating from the late 19th and early 20th centuries, and more recently installed systems. The following list provides an overview of the extent of these systems.

More on Rail Transit and Public Transport in Hungary

Prague's rail rapid transit metro, dating from 1974, is modern and efficient. in addition, LRT tramways serve a number of cities and towns, including Prague, Brno, Liberec, Most, Olomouc, Ostrava, and Plzen.

LRT is the urban rail transit mode of choice in Slovakia, with tramway systems in Bratislava, Kosice, and Trencianská Teplá, and interurban or suburban-type light railways serving Poprad-Strbské Pleso and Strba-Strbské Pleso.

Besides RPR services, Warsaw has a metro, opened in 1995, and most of the large to medium cities and towns are served by LRT tramway systems, listed in the table below.

in addition to RPR services, Talinnn is served by a legacy LRT tramway.

Riga, Daugavpils, and Liepaya are all served by legacy LRT tramways as well as RPR systems.

The collapse of the Soviet Union and subsequent economic and social upheavals have wreaked havoc with the public transport systems in the countries that have emerged. However, a substantial base of rail transit, including metros and urban tramways, has survived.

Ukraine: Rapid rail metros in Kyiv and Dnipropetrovsk; legacy LRT tramways in these and other cities and towns.

Belarus: Rapid rail metro in Minsk; legacy LRT tramways there and in other cities and towns.

Cairo is served by a rapid rail metro, opened in 1987. Both Cairo and Alexandria are served by legacy LRT tramway networks.

Tunis has operated a light metro since 1985.

Johannesburg is served by Metrorail, an intensive RPR sytem.

Most of Australia's major cities operate some form of rail transit – mostly RPR. Melbourne has an extensive RPR system plus one of the world's largest LRT tramway (streetcar) networks, both undergoing vigorous improvement and expansion. Sydney's RPR system runs underground through the city center, resembling a metro. Sydney also has a small LRT line, and is apparently seriously planning expansion. Adelaide, in addition to its RPR services, has operated a largely suburban heritage tramway (the Glenelg line) which is now being upgraded and targeted for future expansion. in addition, Ballarat and Bendigo operate heritage tramways in public service. 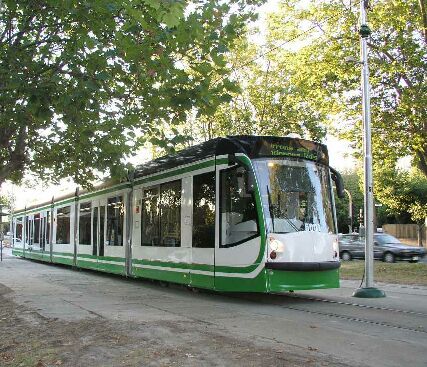 Melbourne's LRT tramway system is one of the world's largest.
[Photo: Mal Rowe]


More on Light Rail and Public Transport in Australia

Auckland and Wellington both have good RPR systems, and both cities are evaluating the possible introduction of LRT.

As an Asian city, Turkey is seeing particularly vigorous rail transit development – and almost all of it some form of LRT. Ankara has both a rail rapid transit metro and an LRT system, while istanbul, izmir, Konya, Bursa, and, most recently, Eskisehir have all installed LRT systems within the last two decades. The city of Adana has a light metro project under way.

More on Rail Transit and Public Transport in Turkey

Tehran opened the original 31.5 km/19.5 miles of its suburban metro line in 1999. This has subsequently been extended by 9.0 km/5.6 miles, and more than 23 km/14 miles of urban metro line have been added. A vigorous program of additional extensions and new lines is under way.

Dubai has become the first city on the Arabian peninsula to launch a rail rapid transit project – in this case, a light metro. Abu Dhabi is also evaluating a rail transit project.

New LRT projects are under way in borth Tel Aviv and Jerusalem.

Calcutta operates both a rail rapid transit metro and a legacy tramway system, for which major upgrading and expansion is under consideration. Delhi opened its first rapid rail metro in 2002. These systems are in addition to the major RPR operations which serve travellers in several indian cities. A number of other indian cities are considering both rail rapid transit metros and LRT.

China has a dense system of intercity railway services and regional and urban rail transit. Beijing, Guangzhou, Shanghai, Hong Kong, and Tianjin are all served by rapid rail metros. Various cities are moving to install light metros and LRT, including tramways. Dalian, Changchun, and Hong Kong operate legacy tramway systems (a heritage-style system, in the case of Hong Kong); the legacy tramway in Anshan is reportedly undergoing rehabilitation and modernization.

Japan is another country interlaced with a dense network of intercity railways and urban and regional rail transit systems. in addition to RPR, a number of Japanese cities and regions have long been operating legacy metros and LRT tramway and interurban systems; now Japan may be awakening to the "light rail revolution" that has flourished in Europe and North America.

it is already playing a key role in the regeneration of urban areas in the United States and Europe. And now Light Rail Transit (LRT) is showing signs of revival in [Japan], with a new route opening next spring for the first time in more than half a century.

Hattori describes a new route opening in Toyama, and notes additional projects "in the pipeline"; for example, "Utsunomiya plans to introduce a streetcar system in five years and Tokyo's ikebukuro area is also enthusiastic about the technology."

Rail transit in Japan's larger cities includes rapid rail metros in Tokyo, Osaka, Fukuoka, Kobe, Kyoto, Nagoya, Sendai, and Yokohama; and a variety of tramways and light railways. Most of these are included in the list below.

There are also special guideway transit systems in several Japanese cities. These include a specially designed Gadgetbahn rubber-tired metro in Sapporo, and relatively short monorail lines in several other cities, including Tokyo.

More on Light Rail and Public Transport in Japan

Rapid rail metros are operating in Seoul, Pusan, and Taegu.

Hanoi has begun a project to install several LRT tramway lines and is planning an elevated metro or light metro. Ho Chi Minh City (formerly Saigon) seems to have a taste for experimenting with special guideway Gadgetbahnen; apparently projects there include a monorail and an installation of the proprietary Translohr guided busway.

Kuala Lumpur has installed several light metro lines, interfacing with its RPR systems, as well as a small connector monorail.

Bangkok currently operates two separate metro-type systems. The Green Line, an automated, elevated 20-km/12-mile light metro, first opened in 1999. it is a standard-rail system using linear induction motor (LiM) propulsion similar to that of Vancouver's Skytrain. The Blue Line, opened in 2004, is a fully underground "heavy" metro 21 km (13 miles) in length. Planning and projects for additional extensions and systems – including an Airport Link line – are under way.

Since 1984, Manila has operated a light metro using LRT technology. LRT is also in planning for the city of Cebu. 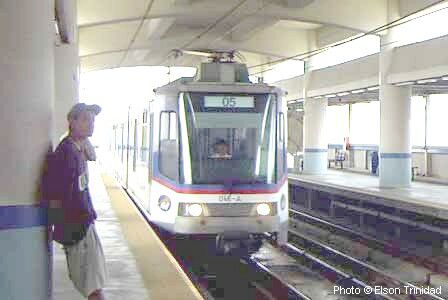