In many respects, the route and infrastructure do resemble those of LRT, with well-defined stations with platforms (except in the mixed-traffic segment), ticket vending machines (TVMs), shelters, and other appurtenances and amenities. 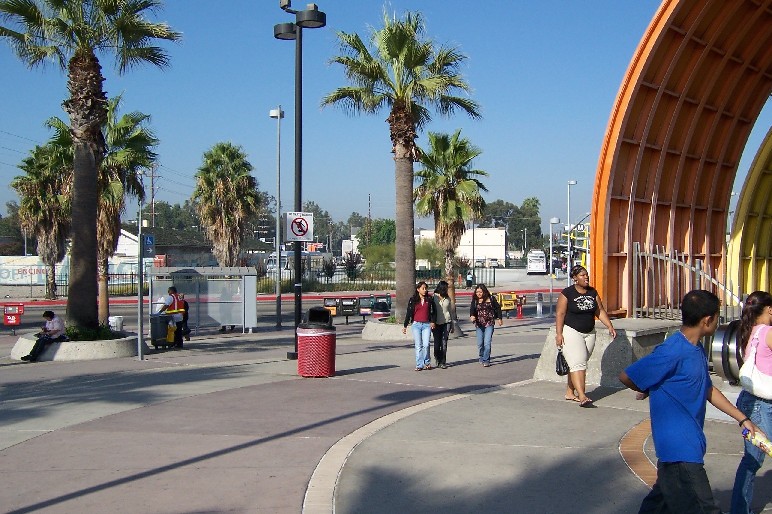 The "Orange Line" functions primarily as a feeder/distributor for the Red Line's North Hollywood station. In this photo, taken from the Red Line station, the "Orange Line" station is visible in the far distance – right across the street (Lankershim Blvd.).
[Photo: L. Henry] 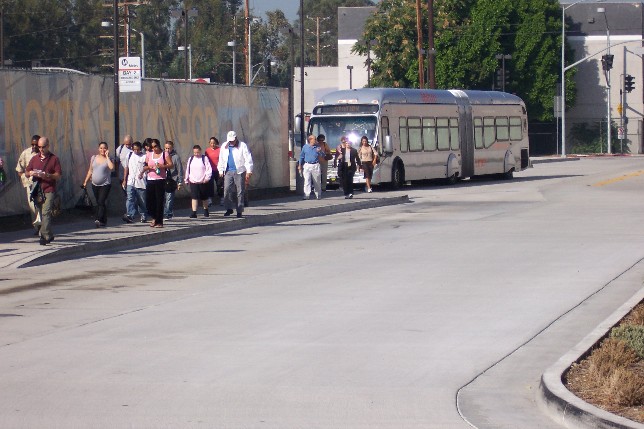 "Orange Line" passengers deboard at a separate open "platform" (more like a sidewalk) on the opposite side of the staging area from the boarding platform (with shelter, TVM, etc.). However, contrary to claims of "BRT" promoters, level boarding from platforms into buses is not a feature of "Orange Line" stations (discussed further in Part 5 of this Photo-Report, Accessibility for Mobility-Challenged).
[Photo: L. Henry] 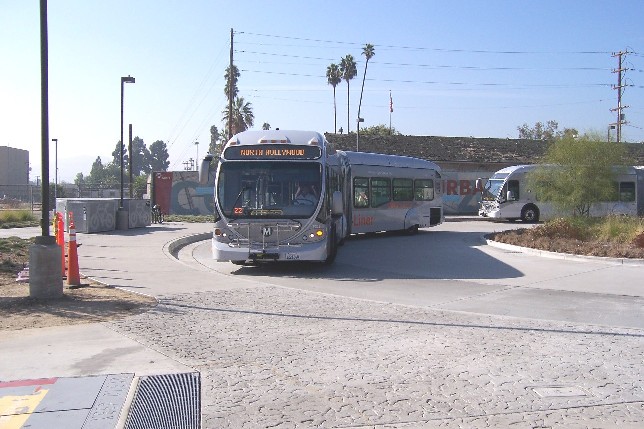 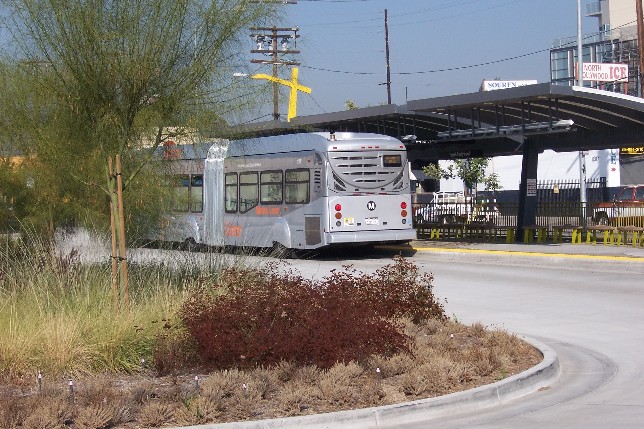 This photo provides a closer view of the covered boarding platform, with a "BRT" bus boarding passengers.
[Photo: L. Henry] 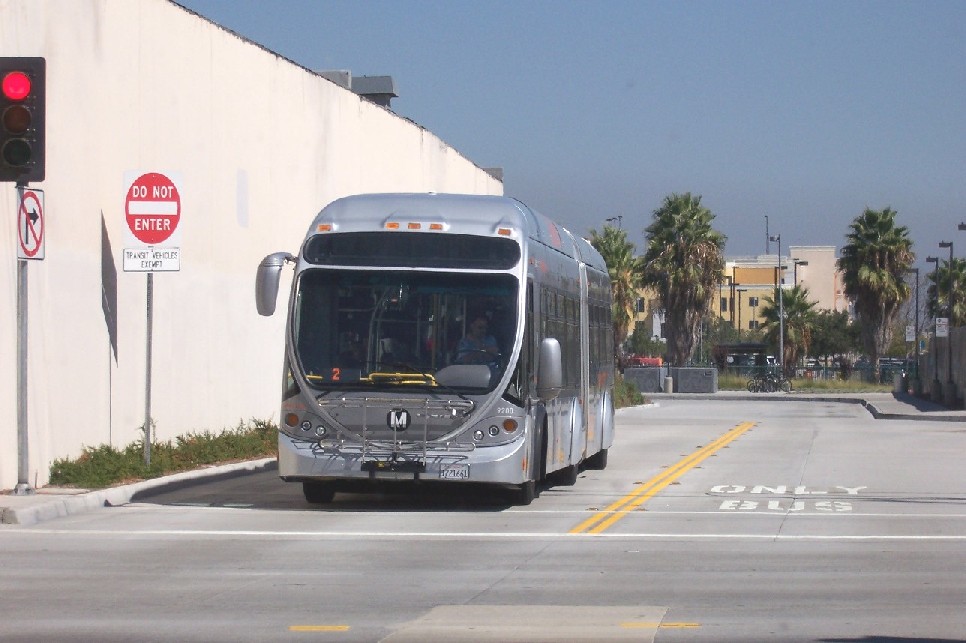 Here a westbound bus is leaving the North Hollywood station area. The open area on the right is the extra lane serving the deboarding "platform" (sidewalk) which is out of the frame of this photo.
[Photo: L. Henry] 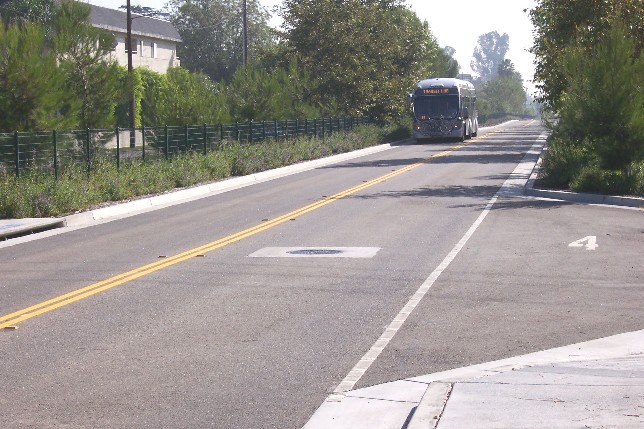 Here a bus runs along a typical section in the moderately densely developed area just west of North Hollywood. Somewhat alarming is the absence of shoulders and median – safety features recommended as essential to safe highspeed operation in several "BRT" design manuals. It's easy to see that, for example, if something would dart from the edge of the running way at the right side of the bus, the driver could be startled into swerving into the opposite lane. This could be disastrous if it happened when another bus was approaching in the opposing lane. (This issue is discussed further in Part 2, infrastructure.)
[Photo: L. Henry] 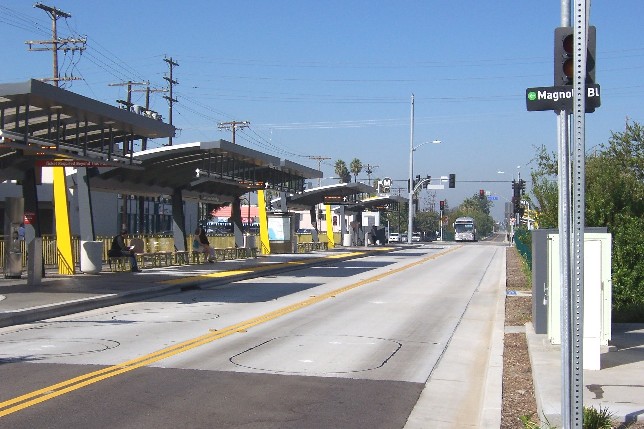 The Laurel Canyon station (on the western end of the busway) is more or less typical of stations on the facility. Passengers can cross the busway via a signal-controlled pedestrian crossing. The low-level busway platform, which is not level with the floors of "BRT" buses, is clearly visible.
[Photo: L. Henry] 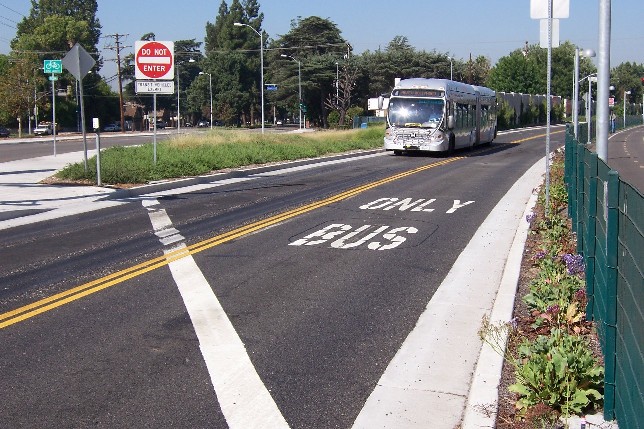 From North Hollywood, the busway (a former railway alignment) follows Chandler Blvd. for some distance, then veers off and crosses it at a fairly busy and dangerous intersection (more on this in Part 3, Operations). The busway alignment then meanders on westward through the Valley, parallelling major roads for a while, then veering off at diagonals here and there, until it reaches its current western end in the Warner Center area.
[Photo: L. Henry] 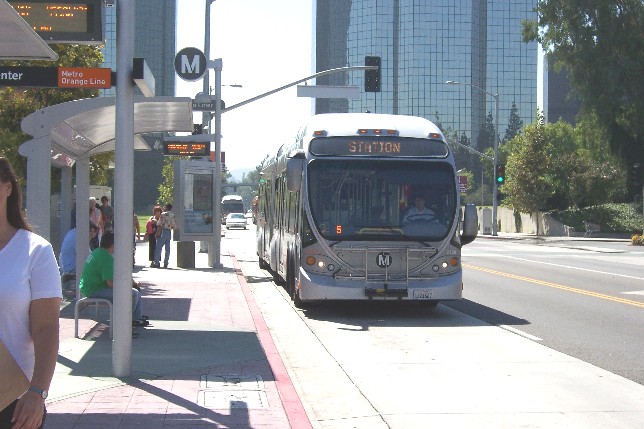 At the western end of the route, buses leave the busway and run in mixed traffic, with a station basically on the sidewalk near warner Center.
[Photo: L. Henry]